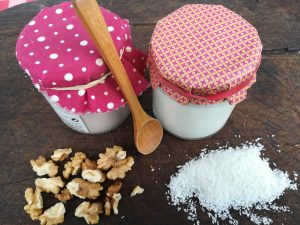 A few years ago, we got to make our first soya yogurt, an actual probiotic one which was just as nutritious as its dairy counterparts. And when we say actual, it’s because there’s no lack of recipes for yogurts which look like the real deal, yet they’ve not gone through the actual fermentation process necessary for them to be qualified as such. Yes, they might be creamy and delicious, but they aren’t quite as nourishing as the probiotic ones.

This task wasn’t an easy one, I’ll give you that. There was a lot of research involved, as well as a ton of experimenting. We used a storebought organic soya yogurt as the ferment, as well as a highly concentrated soya milk.

The first day we got to produce an actual thick yogurt we used no less than 300 grams of white soya to make the milk… That’s three times the amount usually needed! Crazy, right?

Given the amount of requests and enquiries we’ve been having (thanks for the love, by the way!), we decided to experiment with a different kind of seeds and a yogurt-maker borrowed from my friend Ziortza.

Could we make coconut yogurt? Maybe a walnut version? What if I go for sunflower seeds, as they’re much cheaper?

After lots of fail attempts and trials… It’s here! And it’s delicious!

Here are some tips so you can make it happen too!

1- Amount of yogurt: you’ll need to put lots of it in every one of the yogurt-maker jars, about 4-5 spoonfuls… which is more than you usually need to make dairy yogurt (1 spoonful).

2- Highly concentrated milk: it needs to be really dense, so we have to use 250-300 grams of nuts and seeds. Worry not, you have some tips on how to use up the leftovers once the yogurt is made. We wouldn’t want to be wasteful here!

3- Milks made from grains won’t work here, as they’re not rich enough in protein and fats to ferment well. The best seeds and nuts to make homemade yogurt are: fatty nuts (cashews, macadamia nuts, walnuts), coconut, sunflower seeds and soya.

4- Temperature: don’t use cold yogurt as a ferment, it needs to be lukewarm.

It was so exciting to me to be finally able to make my own vegan probiotic yogurt at home, I almost cried of happiness and enjoyed every little bit!

On the downside, we need a lot of nuts/seeds to make these, so here are some tips to make sure you don’t waste any ingredients at all.

You can use them as a second extraction step (explained in another article) when you make plant milks, or keep the pulp to add to other dishes, since it’s really nutritious.

This way we get:

Here’s the recipe, let’s give it a go! These amounts use half a litre of plant milk only, so you can start experimenting without being wasteful.

Step 1: how to make the concentrated plant milk

You’ll see how creamy the yogurt looks after a couple of hours, but if you want it to be even creamier, you can remove the “whey” (not actual whey since it’s vegan) liquid-y part. This can be used to make other drinks or in baking. It’s really healthy too!

The remaining yogurt turns out super creamy and delicious. Such a treat! It will last for up to 5 days in the fridge.

Sunflower seeds and nuts make a vegan yogurt which is similar to the storebought version. The coconut one turns out even creamier, although not quite as thick.

You can make the yogurt even thicker by blending a banana with it.

Another easy way to make vegan cheese and yogurt is by using enzymatic water or “rejuvelac”. You’ll find some ideas in the yogurt and cheese section of this blog.

Thanks for your enquiries and questions. It’s all thanks to you that we were able to make such wonderful yogurts!! 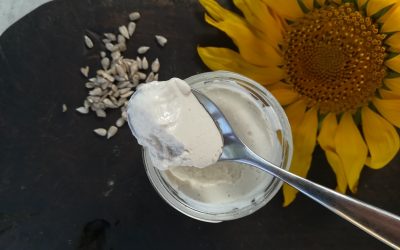 A few years ago,we started experimenting with how to make vegan yogurt with plant milks and, since then, we have been improving our recipes through trial and error. In this article you will find the latest discoveries that will make it easier to make vegan yogurt at... 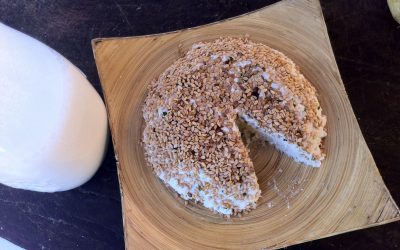 Vegan Milker by Chufamix can not only make the most delicious homemade milks in 5 minutes, but also probiotic yogurts and cheeses. There’s a really helpful recipe including a video tutorial in the article called “vegan cashew yogurt and cheese”. Ever since we... 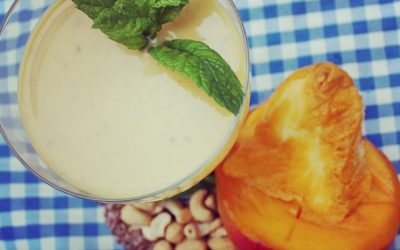 There’s a Vegan Yogurt and Cheese focused section in the blog. Ever since we started our ChufaMix adventure, we’ve discovered lots of great ways to ferment seeds to transform them into Yogurt and cheese. One of my favourite recipes is cashew Yogurt made with enzymatic...